Blog Alternative For Picture Framers And Everything Framing Related
https://theframersforum.com/

This is a Windows application to aid the design and construction of slope sided boxes made from mountboard (sometimes referred to as coved boxes, or slope sided shadow boxes).

Using the results from the designer, it is a fairly simple job to cut out the shape. The trickiest part being the v-grooves (The blue rectangle in the diagram). The corner cut-outs can be made with straight-edge and Stanley knife. And of course, with a CMC the process is even easier. 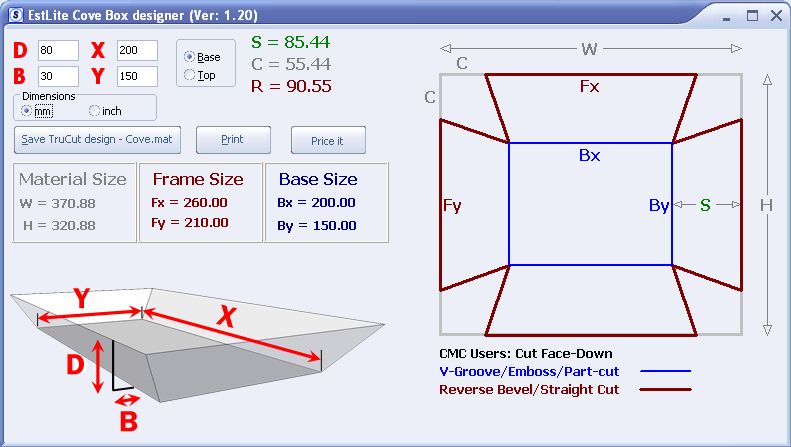 The program will run in any version of Windows from Win95 onwards.

It requires only four inputs: the Depth and Breadth of the slope, and the dimensions of the base (shown in red in the diagram).

Dimensions can be entered in inches or mm.

To use, download and unzip the file, cove.exe, which can be placed in any suitable location on your computer, or on a memory stick.

The application outputs your design to a PLT file that can be used by most CMCs, either directly, or via CorelDraw.

by John
Although this example has been cut on a CMC, it is not difficult to do it manually. 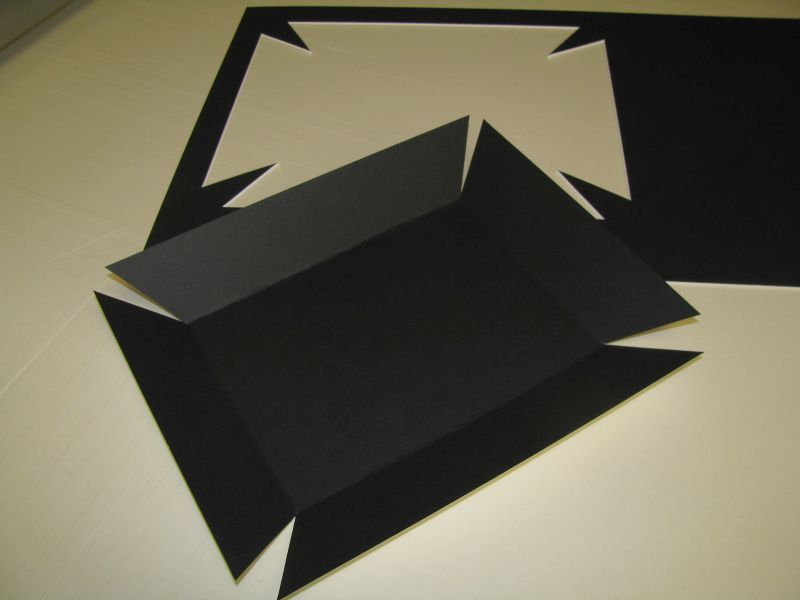 V-groves on the base allow the sides to be easily folded up. 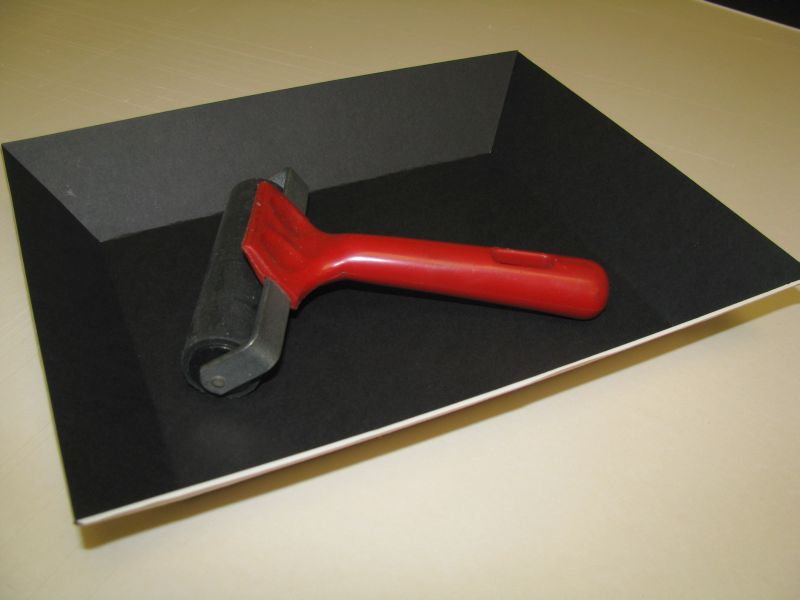 by James Miller
Thank you for providing this handy utility for calculating cove mat dimensions. Very quick and easy to use!

An incredible conicidence: Just a few days before I learned of this from a post on the USA Picture Framers Grumble, I submitted a feature article to Picture Framing Magazine. The subject was a project recently built in my shop; framing a folded flag and a certificate. I used two cove mats in it, and the article detailed how to use the CMC to cut the cove mats.

May I ask the editor to include a link to your cove mat utility in the published article, if it's not too late?

by John
A remarkable coincidence James.

Certainly, provide the link in your article. I hope that other framers will find the application useful.

by markw
What a star! I use this little program a lot - and the improved version will make assembly just that little bit easier. Thank you John.

by Merlin
Thank you John.

Much improved and saves the mental math.

by John
I must credit Merlin with designing and rendering the beautifully clear graphical representation of the slope sided box (the lower left image in the screen shot).

by YPF
I have used previous versions of this for loads of boxes and find it an invaluable tool.

by James Miller
Thanks, John. You have given us a very useful utility, and then improved it. Kudos to you.

by FramingBarista
Brilliant. Many thanks.

by Tudor Rose
What a great Land Rover piece - love it

We've only used the cove box designer a few times, but it is so easy to use and saves tons of work - thanks John.

by Jonny2morsos
Thanks from me too. Here are a couple of items of wedding memorabilia I did. Mountboard is Arqadia Suedette 8525 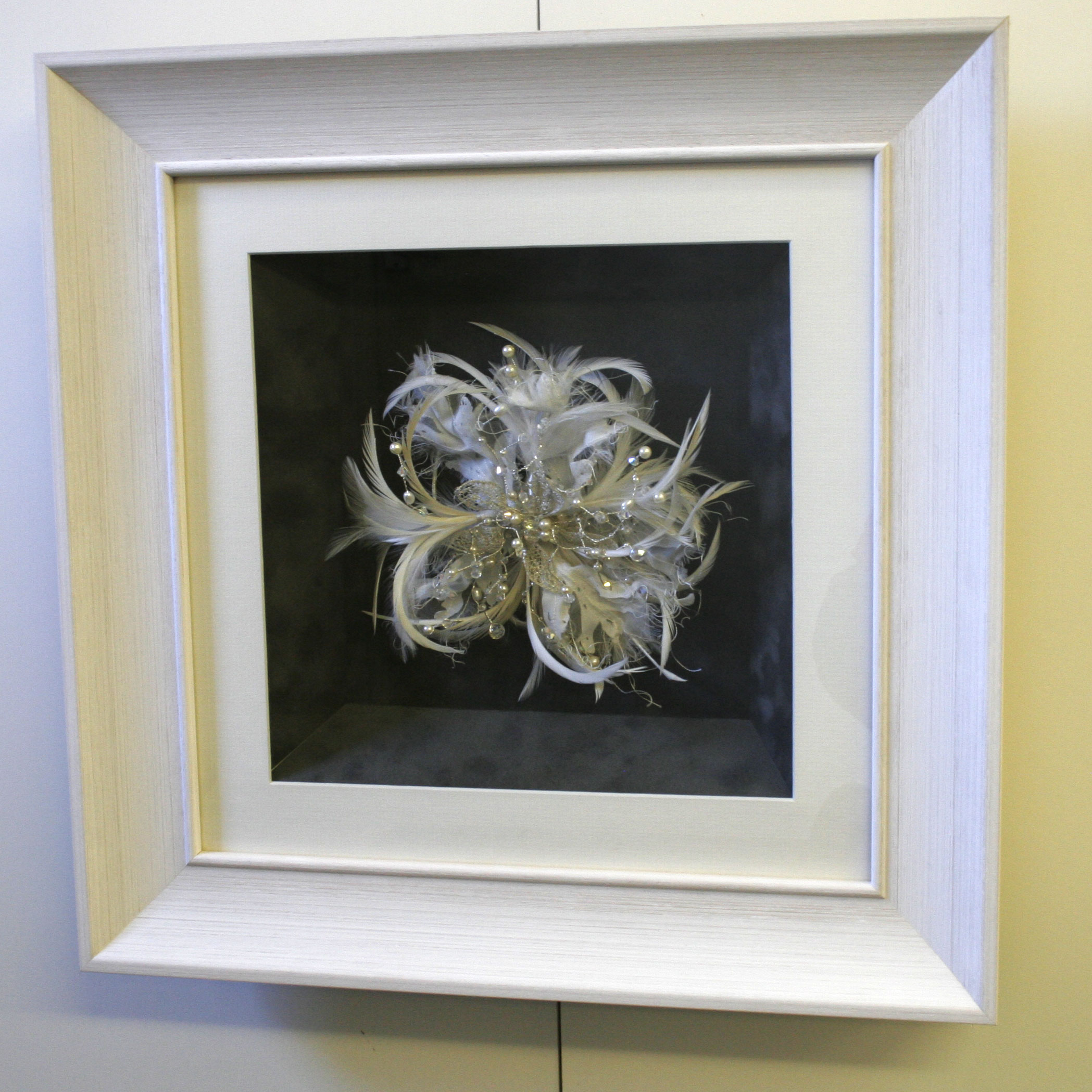 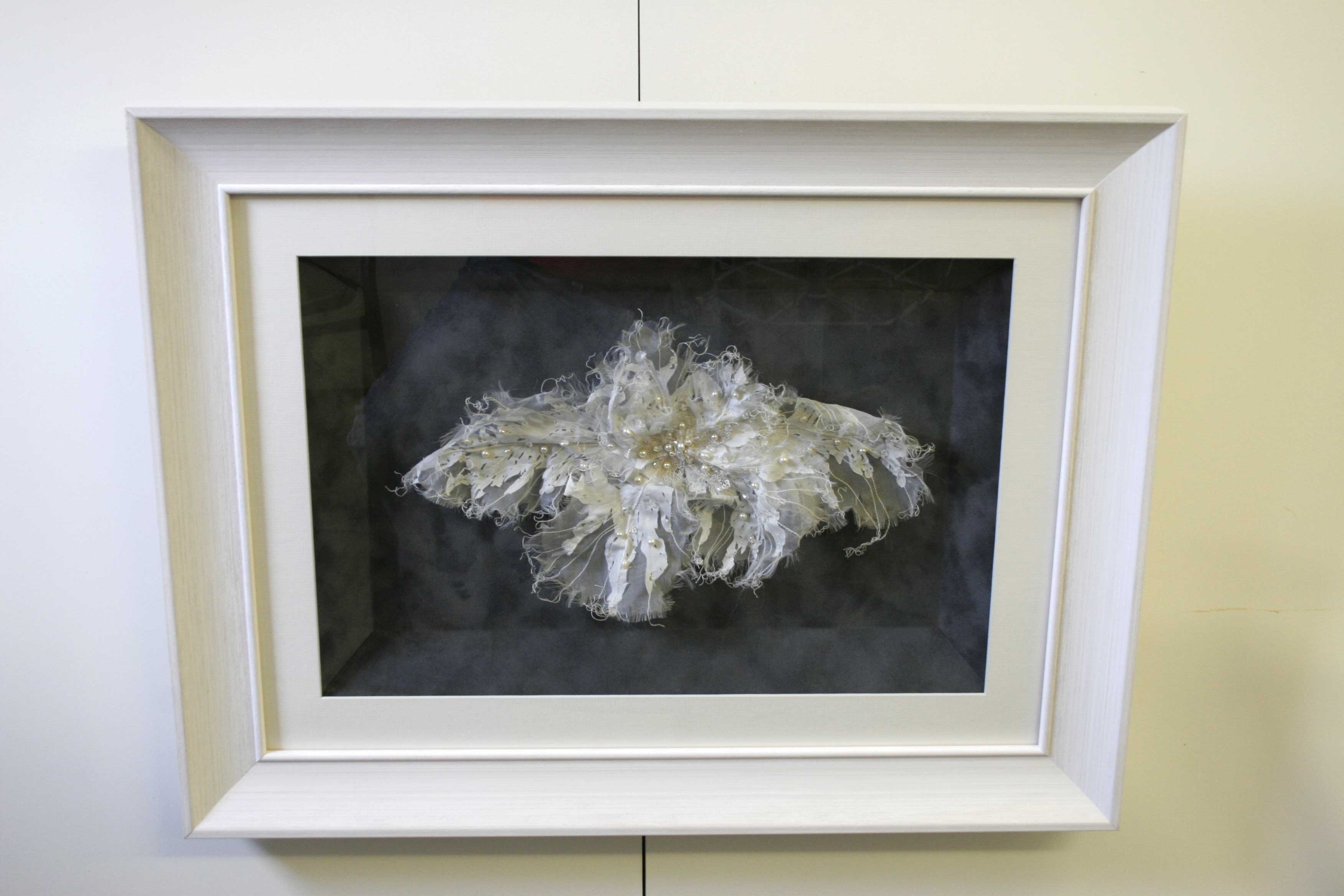 I also had a customer with a collection of medals in a little oak chest with drawers and we made some drawer liners also in suedette mountboard using the ciove box designer.

Liking the Land Rover frame a lot! well done, and I like yours aswell J2M, like the suedette mountboard great effect with the (is it ) feathers look very nice.

to both of you

by Not your average framer
Thanks John,

Today is the first time that I've downloaded and tried the program.

It's absolutely brilliant! All I need now is a customer to try it on!

by GUNNAR
J2M They are lovely

Not your average framer wrote:Thanks John,

Today is the first time that I've downloaded and tried the program.

It's absolutely brilliant! All I need now is a customer to try it on!

I bet you have something lying around or could pick up in a charity shop you could use for display in the shop. I ought to do the same!

by AllFramed
Yes, thanks from me too.

Those are creative uses of the box. I wouldn't fancy trying the Land Rovers by hand! I did as J2m said, dug out my London Marathon medal from what seems long long time ago....

Not a great picture but the medal is in a box.

by David McCormack
I would be interested to know about the different methods everyone uses to attach the cove box to the frame?
Thanks.

by silvercleave
Cut the sides as normal but leave more board, then score and fold a flap down then use tape or glue to attach to the reverse of the front board.

Does this make sense?? it did to me!!