I want to make a couple of nice strut backs for some 10x8 photos.

I've never liked the mdf jobs you can get and think they never really match the quality of a hand finished frame. Any ideas on how to go about making something like the attached image? What thickness of wood? I know you can get small brass hinges but what size screws would you use?

Any help and ideas much appreciated as always

ps
I'm only interested in the strut back, not the metal frame... my frames will be oak. 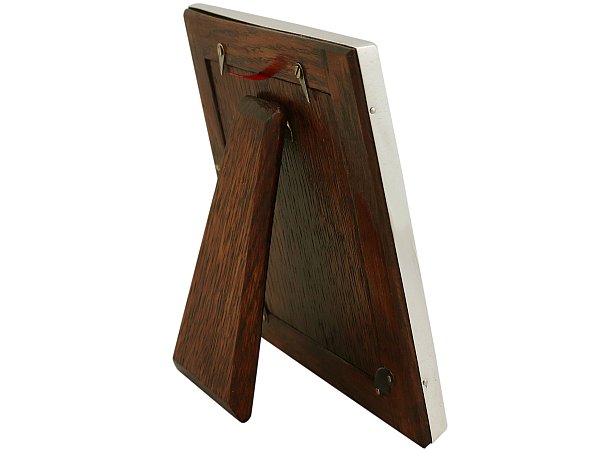 How do you think this strut is attached to the back? Rivets? 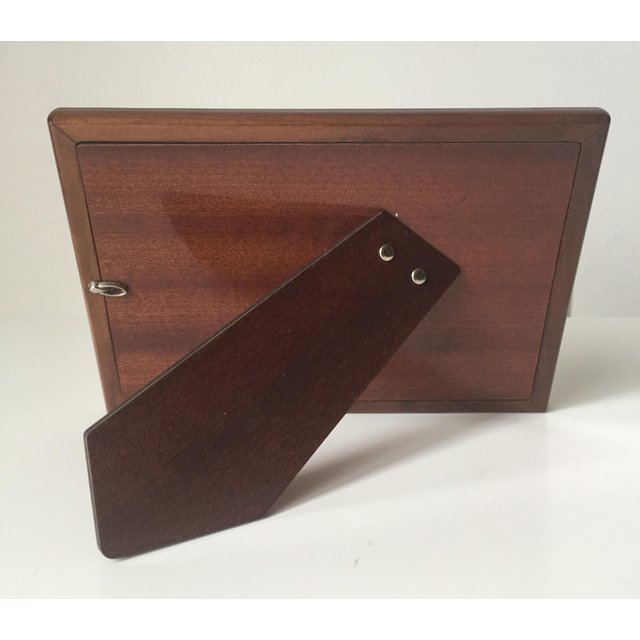 Some of us are fortunate enough to have stocks of the clip and bar fittings. There used to be a framing shop in Totnes that did all the old fashioned stuff like this and they were called Western Arts, they used to make up stuff like this on a regular basis, but eventually the owner closed down and the building was redeveloped over perhaps a year. I bought just about everything in the place, except their Euro "butterfly" underpinner.

So I know what they used because I've got boxes of the clips and bars. Like you, I want to make quality strut backs, but getting decent oak boards is a significant problem and sadly, if you are going to buy boards made from well matured oak, the price is going to make it hard to get a decent profit margin out of doing this. I not saying it can't be done, but you have got to find a reasonably priced way of getting the oak for the boards.

As for the screws, this is a definite problem area. The holes in the clips and bars were never intended to be suitable for fixing with wood screws. I would not even bother trying to fix these with wood screws, getting enough grip in the wood with screws tiny enough to go through the holes in the clips and bars, is simply not going to happen. You have to have a re-think.

Back in the late 60's when I left school and became an apprentice, the country had not at this time switched to metric screw threads and a popular version that existed then was BA size threads. BA stood for British Association, the threads were quite fine and the smallest screw thread sizes were tiny, but threads were easily tapped into all manner of materials. These threads are still used by those who make models and model shops still sell BA nuts, screws, washers, plus taps and dies.

There's not much material around the holes in the bars, but I fairly sure that there is enough to tap the hole with a suitable sized BA thread. Unfortunately you've not got much choice, but to used a screw with a countersunk head for fixing to backing boards and countersunk heads are the strongest, so I think that the wood for the backing board need to be think enough the glue the screw into a good thickness of backing using Araldite, so that nothing is going to move, or work loose.

I would also use a pan head screw to fix the clip to the strut and I would drill and tap a suitable size threaded hole in the wood of the strut and glue the screw into the wood again using Araldite. I have not seen any evidence of others doing this, nor have I done this myself, but I think that this is the way that I would tackle this problem.

Squires is not the only model and tool shop around, but they just happen to be the one that I know. Other suppliers in the same market are likely to be just as suitable, so shop around.
Mark Lacey

Or try drilling a hole in the frame, if the moulding is wide enough and push fit one of these into the frame, in the right position to allow the frame to stand at the angle of your choice. No need to glue the peg into the hole, just in case the customer wants to remove it.

It's cheap, quick, easy and I think that a lot of customers will really appreciate the idea.

What are the clip and bar fittings?
"You know, there's a right and wrong way to do everything!"
Oliver Hardy.
www.davidaustinmccormack.co.uk
Top 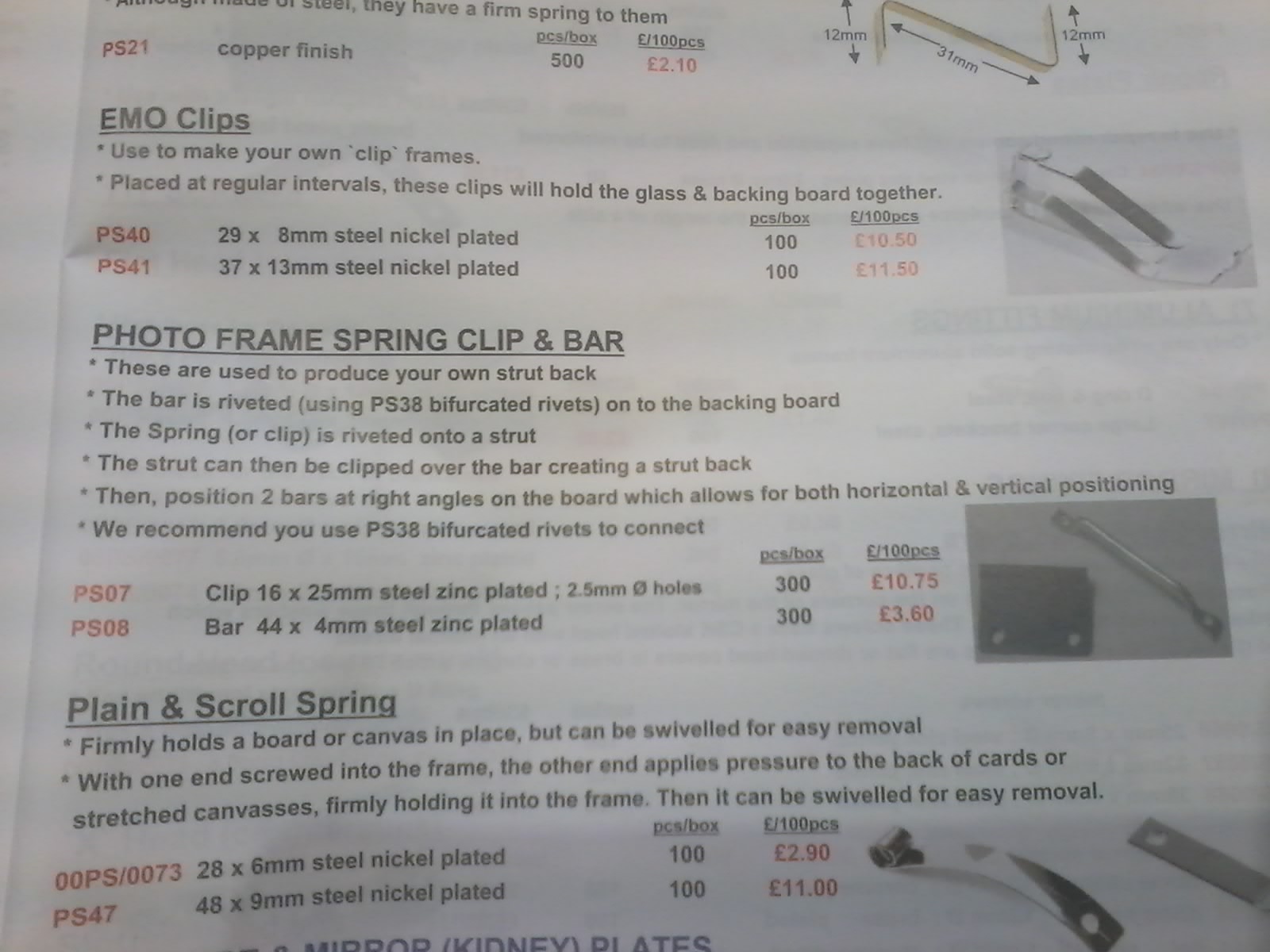 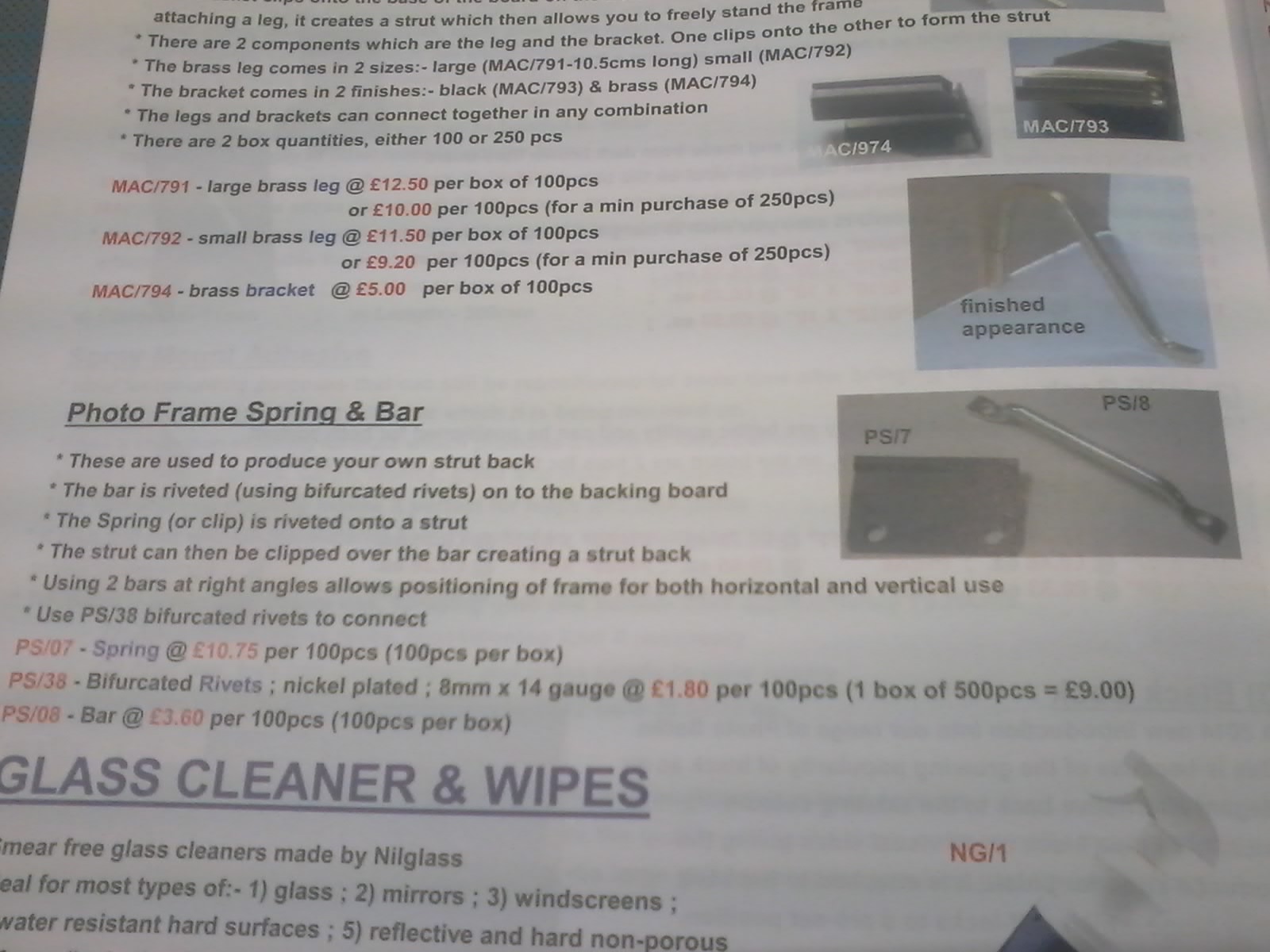 You have a bar that is riveted/crewed to the backing and a bit of spring steel that is fixed to the strut, which clips onto the bar on the backing, you get this set up on some bought strutbacks , having two bars on the back so you can move the strut from landscape to portrait
Steve CEO GCF (020)
Believed in Time Travel since 2035

Thanks Steve, makes sense now.
"You know, there's a right and wrong way to do everything!"
Oliver Hardy.
www.davidaustinmccormack.co.uk
Top

You could make those nice wooden photo backs if you had a table saw to cut the shapes and a router table to bevel the edges. The struts could be cut from a length of R&H F7 or F15 and the back board from some ply.
For the hinge I'd be tempted to use a 30mm brass Kraft hinge. I used to make hundreds of wrapped strut backs and used a heavy lump hammer and a foot square slab of 1 inch black steel as an anvil. One thump and the hinge fixed solid.
Lion should have most of the hardware.
https://www.instagram.com/dermotmcardle/
Top

Did you mean kerf hinges?

Before anyone asks, yes it is possible to make strut backs using kerf hinges, if both the backing board and the strut are of adequate thickness. Please be aware that kerf hinges are available in various shapes, sizes and diminsions to suit various uses. and there are more companies producing and supplying kerf hinges, than just Craft. I think that these need accurately cut openings for fitting the hinges and some form of jigging may be necessary.

To my way of thinking this could be not as difficult to produce really nice classy strut backs, that some of us might be thinking. I probably would not be planning to use a router to round over the edges as this is probably not that hard to do by hand on a bench mounted belt, or disc sander (Linisher) using a fine abrasive disc, or belt and a quick rub down by hand using a sandpaper block.

I would prefer solid wood boards, to plywood boards, because the end grain of plywood is more difficult to get a quick and easy straight forward finishing result. Also, I'm guessing the glue in plywood may wreck the little saw blades for Kerf hinge saw blades a little to quickly. Normally it is favorite to use Tungston Carbide circular saw blades for cutting plywood, to counter the harness of the glue and quite often the rubbish that gets into the inner layer of the plywood.
Mark Lacey

No Mark, sorry, they are now called Apple hinges, not Kerf. They were called Kraft hinges when I last used them.
Thats a good idea to use a linisher to finish the edges of the struts. Far less bother than the router. i can't see any easy way of finding a thin solid wood back, however. Most young timber for sale will "cup" on large widths.
https://www.instagram.com/dermotmcardle/
Top

I've tried all sorts of systems for strut backs. I've yet to find the 'Goldilocks' formula.

Making them as per the picture is not rocket science, but it has to be said it's not a five-minute job. Looks very
classy if you have the clientele who are willing to pay for such refinement.

The main sprag as far as I can see is fixing the hinges to the strut. It needs to be thick enough to hold a screw but not thick
enough to look bulky. Riveting would mean rivet heads showing, which would spoil the look - unless you could get antiqued
rivets.

Oak veneered plywood would maybe be an acceptable shortcut except you wouldn't be able to do the chamfered edge. But smoothing
the edges and painting to disguise the plys might work.

Bars and clips are quite neat and convenient, but brass hinges look more classy. With bars and clips you don't need a 'stop' to hold
the strut at the right extended angle (at least on smaller sizes) but hinges need a bit of ribbon between the strut and back. More
fabrication - more time - more expense.

There's more to strut back than meets the eye.

Has anyone tried these, also from Lion

At least they can be unscrewed and removed when packing them up or boxing.
Top

prospero wrote:There's more to strut back than meets the eye.

Ain't that the truth

I really want to use brass hinges and screws but realise I need a 'stop'.

Prospero, how would you go about attaching the ribbon to the strut and back?
"You know, there's a right and wrong way to do everything!"
Oliver Hardy.
www.davidaustinmccormack.co.uk
Top

A small drilled hole and a neat knot.

When I make my easels/display stands I use brown para' cord, drill a neat hole slightly countersunk, and a neat knot. It looks and works fine.

Yes, thanks Peter. I already have that brown cord in Steve so something to think about. Easel backs.... nothing easy about them

Some more pictures of how they used to be done 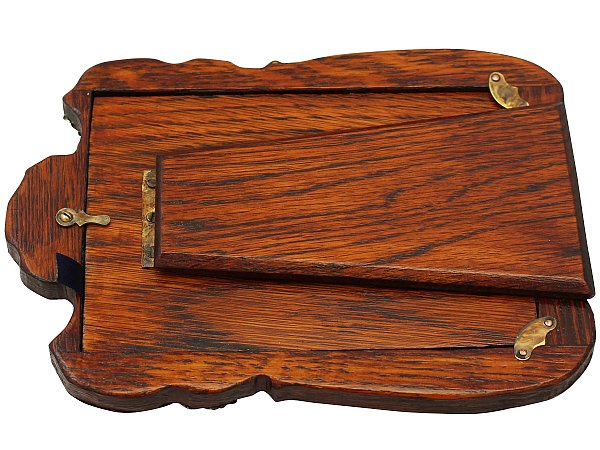 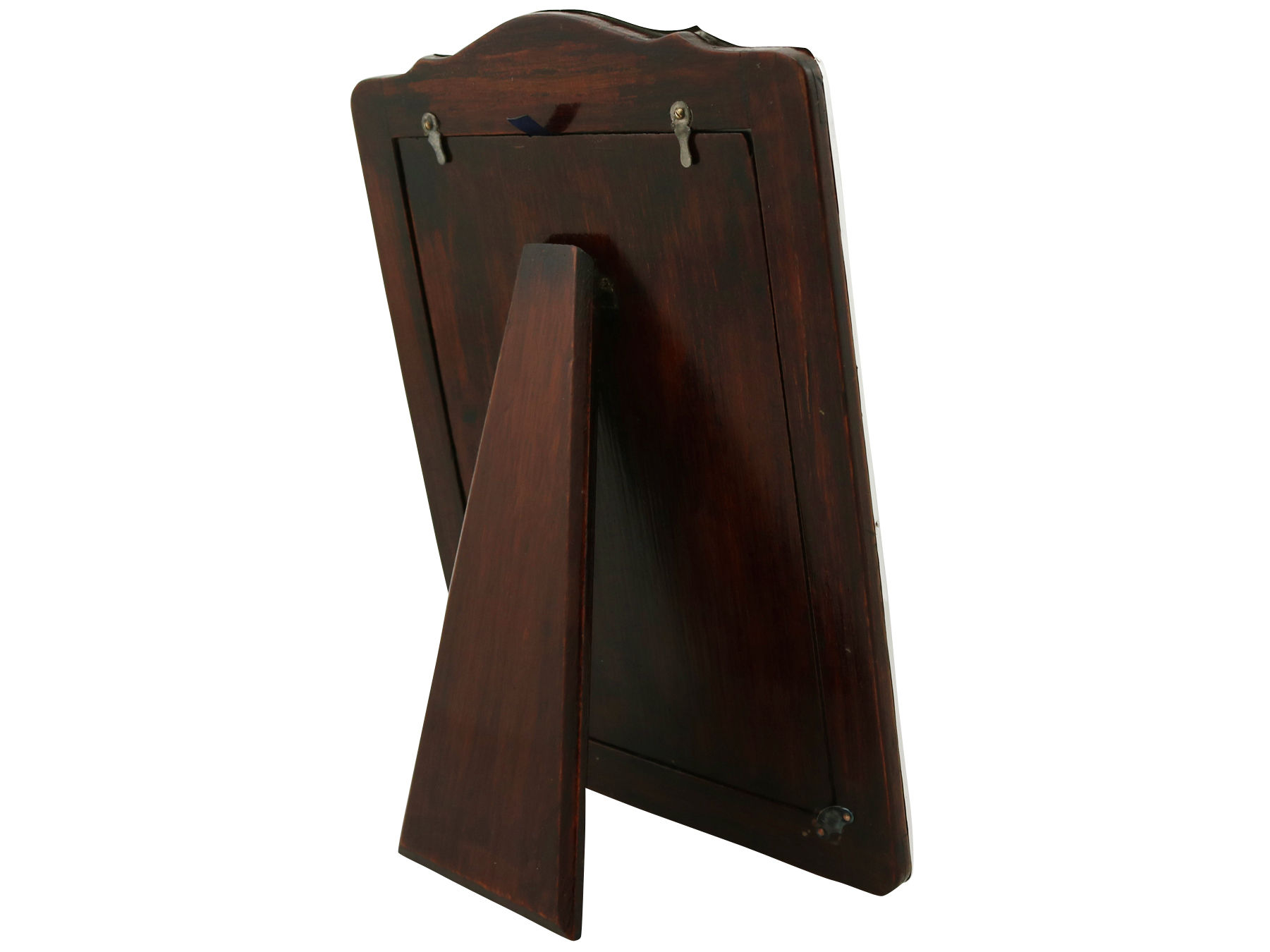 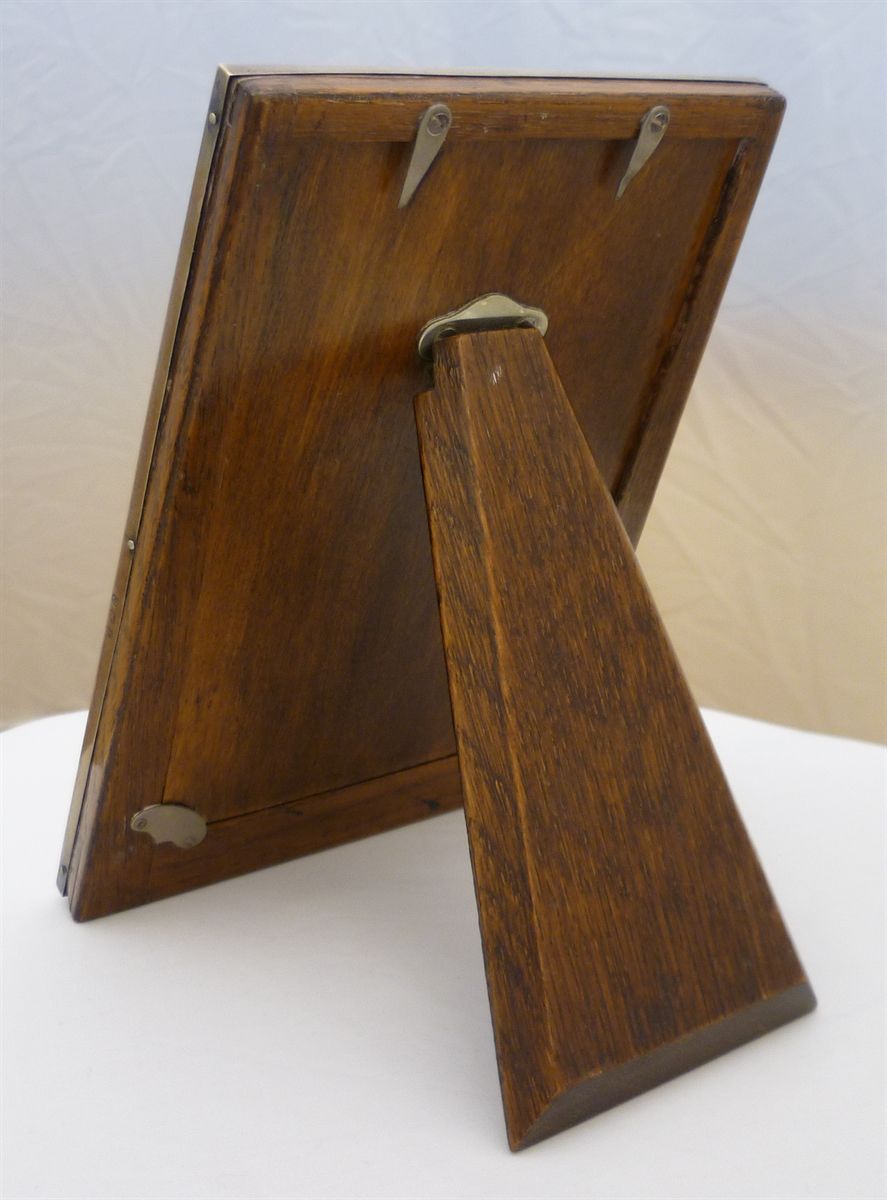 A D-ring fixed to the strut makes a neat attachment point. A brass one or those nice bronzed ones would be nice.

Those Edwardian frames were made in an age when labour was cheap. Tuppence a month and a horsesh*t sandwich.

Apologies if you know this one, but a good tip I have taken on board, posted some time ago by a former FF member, is to attach a couple of suitable frame bumpers to the bottom of the frame to prevent marking any surface and minimise slippage.

I normally use cork bumpers for my frames but I think for strut back frames those clear dome shaped ones would be best to minimise slippage, especially on a polished surface.
"You know, there's a right and wrong way to do everything!"
Oliver Hardy.
www.davidaustinmccormack.co.uk
Top
Post Reply
49 posts