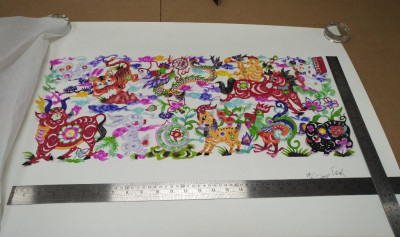 A customer brought this in over the weekend, he bought it in China , it's all different paper cut Chinese zodiac animals, stuck together , somehow ...
Size is approx. 66cm x 29cm and I'm wondering how to attach it . I did a much smaller one previously which I was able to fix in place by laying a sheet of Mylar over it, no glue I don't think. I don't think the customer needs a mount border but it depends how it's going to be fixed in place.
It's reasonably delicate as you can imagine, any thoughts would be appreciated if you have done something similar before

Thanks,
Adam/Bagpuss
My real name is Adam Laver aka "Adam The Picture Framer", just in case you were unsure ; )
Top

You don't mention the value of the work or what level of framing you intend to work too.
My wife is a papercut artist, usually working with white paper. I often encapsulate the pieces between two pieces of UV non reflective glass, spacers behind and a coloured mount behind. It gives great shadows.
I realise that it's not ideal to have work touching the glass, but sandwiching the glass, we haven't had any slippage issues or damage so far.
I've read of framers using pinhead drops of glue to fix a piece like this to amountboard/ glass backing. Neutral and reversible EVA glue could work for this.
Justin George GCF(APF)
https://www.instagram.com/georgetheframer/
http://www.georgetheframer.com/
Top

Justintime wrote
"I've read of framers using pinhead drops of glue to fix a piece like this to amountboard/ glass backing. Neutral and reversible EVA glue could work for this."

I have quite a few different Chinese paper cuts in my plan chest waiting to be framed (a ready supply from my Chinese sister in law). A while back I framed one as a sample display piece to go in the window - it lasted about a week before it faded very significantly!

I have framed them with tiny spots of glue and also sandwiching between mountboard and 2mm acrylic. Both methods will allow a window mount to then go over the top.
Steve
Chief Coffee Drinker
http://www.yourpictureframer.co.uk
Top

Bit of a late reply, apologies...I’m a newbie and also a papercut artist. I tend to cut A lot of really thin intricate designs (Line work). One that I do In A3, the bough of a tree, the thinner branches are only 1mm wide so they are too narrow to glue without seeing the dot, plus it’s only 90gsm paper and quite fragile so I use 1 sheet of 500 micron Clear View acrylic with the cut between that and the mountboard, the cut has a few glue dots just to tack it in place, then the mount on top. I have “Glass sandwiched” them too before now, only needs a few dots just to tack the work in place as the glass keeps it flat. Commonly, without using acrylic, its mini dots of neutral ph adhesive, generally a cocktail stick ( I use an awl) dipped in the glue, dabbed on the back of the work which is centred, paperweight on it, lifted and “Glue dotted” from the centre outwards in stages towards the edge. An inch or so at a time that you let rest back down and lightly touch the work to make sure the glue just touches the backing, I generally mount directly on to Arqadia mount board. I tend not to want any static on the acrylic as it only keeps the work flat and the static will almost pull dust and bits from the moon generally so I peel both sides, run the shower over it for 20 seconds, this kills the static completely, then wipe the droplets off with some damp toilet tissue or kitchen roll (so it doesn’t scratch or leave watermarks).

Question: Just a thought, if I sandwich between two sheets of glass (although a least preferred method) is there any gain by running a bead of glue all around the join at the outside edge of the glass to seal it so air etc can’t get between the glass sheets...or not?

Dave, I sandwich the two pieces of glass together with Scotch Magic tape, placing it about 3mm onto the glass, wrap around and trim the back tape to the same.
Justin George GCF(APF)
https://www.instagram.com/georgetheframer/
http://www.georgetheframer.com/
Top

Great mate, thanks very much for the reply