Post examples...
Of framing styles or techniques that rocked your boat, and also of those that didn't
Post Reply
13 posts • Page 1 of 1

I've just made another two sets of Hogarth frames, 14 in all.
This was for a series called "A Harlots Progress" 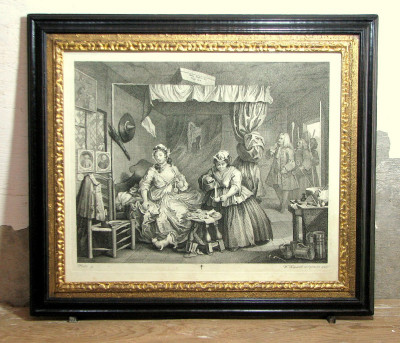 and this a series called "A Rakes Progress" 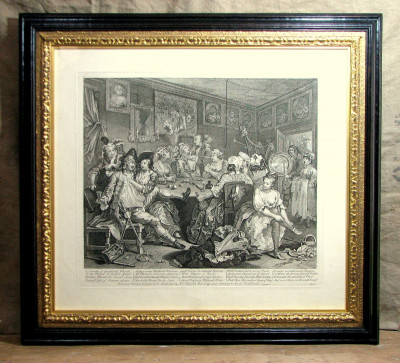 This is the type of frame was the historically correct for the period of Hogarth's lifetime. The much later 'Hogarth Frame' that everyone is more familiar with was actually attributed to a framer whose name was Hogarth and its simpler style was widely used for displaying antique prints and mezzotints.

Looking back, there was a terrific amount of work that went into making these. Yes, I enjoyed doing it but the sheer quantity of physical work involved is quite knackering.
Much of my machinery is quite light-weight whereas someone like fusionframer has a more grown-up workshop.
I'll try to give a brief description of what's involved.
First there's the outer section.

This is an ebonised profile made up from a shaped slat of fruitwood pre-glued onto a pine base.
The fruitwood comes in big rough sawn planks and these have to be pushed several times though the saw to reduce and planed down to a measured size. The pine is then clamped and glued to both sides of the fruitwood board and when dry, split down the middle so you have two equal sections of laminated pine/fruitwood.
Keeping up?
These two sections are then run though the saws again to finish up as squared rectangular blocks.
Now they need fed through the spindle moulder repeatedly until the finished profile is obtained.
As this is a reverse profile, the pine base is cut to a sloping angle and the overall profile then rebated to match.
And that's the first bit.
For the inner sanded section, I used a R&H pine stretcher and shaped it to the profile required. 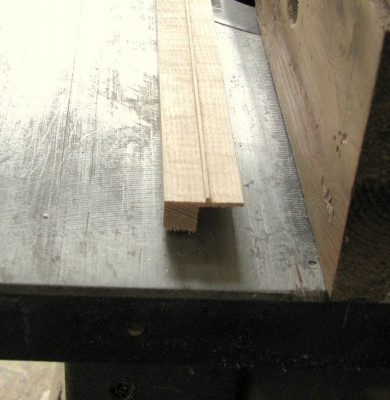 Then it was time to cast the compo ornament. That's the detail that goes around the sight edge of each frame.
For this job I had to cast 96 pieces of compo, and that is a lot of casting. 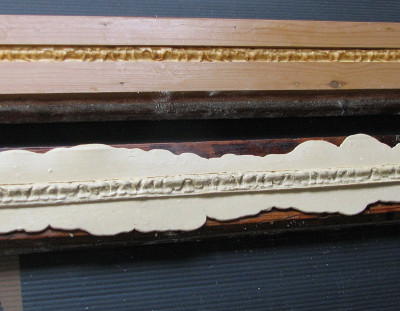 When all finished, I left them to harden up a little before gluing them on to the lengths of pine.

The flat section or frieze was covered in sand, then coated with a layer of gesso. After filling all the compo joins and claying up with yellow ochre, the pine section was oil gilded with 22ct gold. 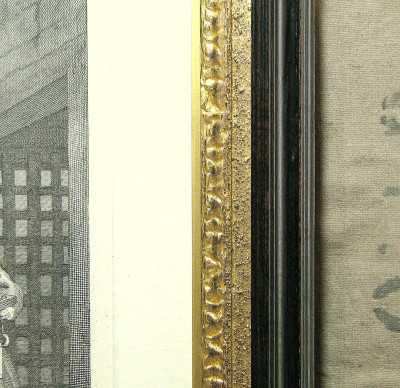 There were 8 processes involved in all that and each of those required an overnight drying period so you can see how these things do take some time.

Going back to the outer sections - the assembled frames were given a strong coat of Van Dyke stain followed by 3 coats of shellac - two with a strong black coloured stain and a clear one on top. De-nibbing was with lots of 00 wire wool and finished with a paste of pumice and white spirit. 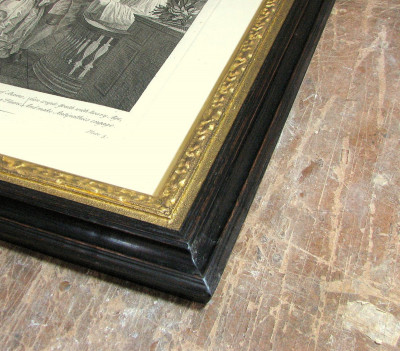 So that was the basic frames made. Next was to tone them down to match the colour of the antique prints. Even with lots of rubbing back, the black shellac was much too black and the gilding too brilliant. I wanted the frames to support but not overpower the artwork; to have a tone that appears to set them back from the art yet enclose them in harmony with their antique provenance.
For that I used a grey glaze which has a subtle effect on both the gilding and the black shellac. So much so that even when the frames were waxed and polished with beeswax, the antique effect was maintained throughout.

Finally moving on to doing some picture-framing. I was fortunate to have 'justintiime' cut all my boards with great care and accuracy. Justin lives quite nearby - up a mountain.
For the glass I was able to buy a quantity of reclaimed glass from a dealer in antique frames.
Cutting antique glass is not for the faint hearted.
You get the glass squeaky clean, listen to the cutter sing its way down the cut, snap on the line and then watch the split shoot off in a wide arc to the right!
When I did manage to cut all the glass, the effect on the prints was quite startling. Although hopelessly the opposite of non-reflective, the ripples in the glass actually add life and vibrancy to the art and when cleaned, the glass has an almost crystal-like quality. I think this is because of the lead that was then used in its manufacture.

With all that done, the prints were tissue hinged onto the museum quality boards and an internal spacer added to separate the prints from the glazing. 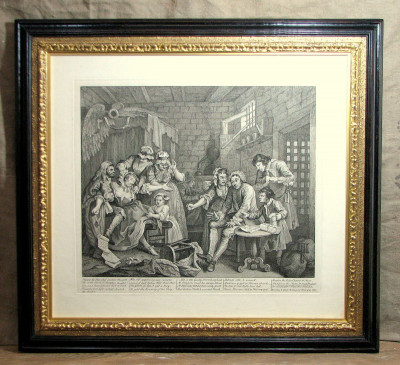 And with all that done - someone wants another eight.
Affordable Gilding Course for Professional Framers-https://www.dermotmcardle.co.uk/
https://www.instagram.com/dermotmcardle/
Top

Lovely job Dermot, and very interesting to see the amount of work involved in the making of those frames.

Your prize for finishing them is you get to make another 8!

Superb job and a very clear and concise explanation to go along with it.

Thanks for your comment, Mark. You are always very supportive.

I'm glad you found something of interest in there, Nick. I have a certain amount of machine envy of you and know that you could whip those frames up in half the time I take.

Thanks also Tudor Rose. It's rewarding to hear someone showing genuine interest in frame-making techniques.

I would love to hear of others that were making their own frames. Fusionframer is there and has actually offered make them for you - even if it's only a few lengths.
It does take a degree of courage, commitment and innovation but the satisfaction is so much more rewarding.

We hear every day of 'picture framers' retiring and selling off their equipment.
You don't hear the same from those who make their own frames.
Affordable Gilding Course for Professional Framers-https://www.dermotmcardle.co.uk/
https://www.instagram.com/dermotmcardle/
Top

I'm very impressed by the things which you show us on the forum. Being someone who makes quite a lot of ready made frames myself, but I don't have the customers for water gilded frames myself, I still have a better understanding than most of the time and commitment and the level of workmanship which you put into these frames. I also think that you are a great encouragement to many smaller framers, who are looking for ways to raise their game in these increasingly difficult current times. I will not be able to graduate to doing such work myself, as I no longer have the manual dexterity, but I enjoy seeing the details which you are posting of your work.

My own work is of a different level to yours, in so far as I do you have the capabiliy to undertake machining mouuldings from scratch, but I'm much more working from the level of adapting and modifying standard "off the shelf" mouldings, which involve much less effort and also producing rather grand looking substancial prolies using stacked moulding frames. As the weather wars up, I am hoping to be able tore-organise my own shop, which tends to be a bit cold in the winter months and this is a problem for be as getting too cold and having a ongoing heart condition causes my problems.

However, as you may have noticed from some of my posts, I am intending to pass on some of my own handfinishing and stacked moulding frame techniques and no how to the many new comers to the framing business in these difficult times, during some free of charge open days and also some more involved training courses, which unfortunately will need some small fees to make them possible. I am already encouraged to see that Jeremy from Gesso and Bole has recently started doing handfinishing training courses as well, hopefully in time maybe the will be a few more in different areas in the country as well. Things are starting to happen will aspects like this and hopefully this will expand as time goes on.
Mark Lacey

Dermot,
Wow, mountboard AND spacers to separate from the glass. I've not heard of this before. Is it an old technique or something that you have chosen to do Dermot? Because you are using spacers with mountboard, after hinging the work in the mount package do you then seal the mount package to prevent future warping of the bevel of the mount or it lifting?
Beautiful work!
Justin George GCF(APF)
https://www.instagram.com/georgetheframer/
http://www.georgetheframer.com/
Top

Sorry Justin, I didn't express myself properly.
When I talk about mountboard I was referring to the backing board on to which the prints were mounted. Float mounted in this case and using tissue hinges.
The boards were then separated from the glass using the usual method of internal spacers hidden inside the rebates.
Or have I said that all wrong again?

The only sealing up I do is then provided by the gummed tape on the backs.

One little delight from framing antique prints is that any dust flecks etc held inside the frames become almost invisible.
Thanks for the praise - much appreciated.
Affordable Gilding Course for Professional Framers-https://www.dermotmcardle.co.uk/
https://www.instagram.com/dermotmcardle/
Top

Ah yes of course, sorry Good Friday brain...
I mistook the plate mark for a mount.

Is it a gilded spacer I can see inside the glass or is that part of the moulding?
Justin George GCF(APF)
https://www.instagram.com/georgetheframer/
http://www.georgetheframer.com/
Top

On the much bigger paper sheets for the 'Rakes Progress' I wanted the frames to look a bit more important, so instead of an internal spacer, I used a gilded slip as a separation device.

I know some might think that with so much paper showing, a mount would have been the easier approach but aesthetically that would have just looked - all wrong.
Affordable Gilding Course for Professional Framers-https://www.dermotmcardle.co.uk/
https://www.instagram.com/dermotmcardle/
Top

How did you apply the sand and what type of sand? Do you sprinkle onto pva or anything before covering in gesso? I really like the finish it gives.

Here's how you do it.
Buy a bag of Play Sand and heat a quantity of it in a dry saucepan, so as to drive off all the moisture. Now it will pour quite easily.

Place the joined frame on a large sheet of foamboard that has a fold running down the middle.

Paint the areas to be sanded with two coats of hot RSG.

Now pour the sand over all the frame, smothering each side liberally. Leave the sand on for about a minute, then lift up the frame and let the loose sand pour back onto the mountboard. Folding the board will gather the sand up so that it can be saved for the next frame.

The sanded frame must now be left overnight for the sanding to set properly. Then you can paint on a coat of gesso using a soft watercolour brush - and leave that to dry for a further 24hours!
Affordable Gilding Course for Professional Framers-https://www.dermotmcardle.co.uk/
https://www.instagram.com/dermotmcardle/
Top

Thanks for details. I have seen that effect a fair few times, but didn't think it was going to be sand.