Post examples...
Of framing styles or techniques that rocked your boat, and also of those that didn't
Post Reply
13 posts • Page 1 of 1

Just started this frame cut down, I've done hundreds of these before, but is always bit nerve racking and also a little sad to change an antique frame size or modify it, but it's something that is done a lot in museums and private collections. I've got another one I'm doing which has already been resized (about 100 years ago), and I am making it smaller again.

This frame is French, late 19th Century. It's being made about 5" smaller each dimension to fit a painting... and also the outer section is being changed, it is currently 8 1/2" wide, some acanthus leaves will be added to the corners and the gilding will be cleaned and regilt in places. Will post a picture when it's done finished. 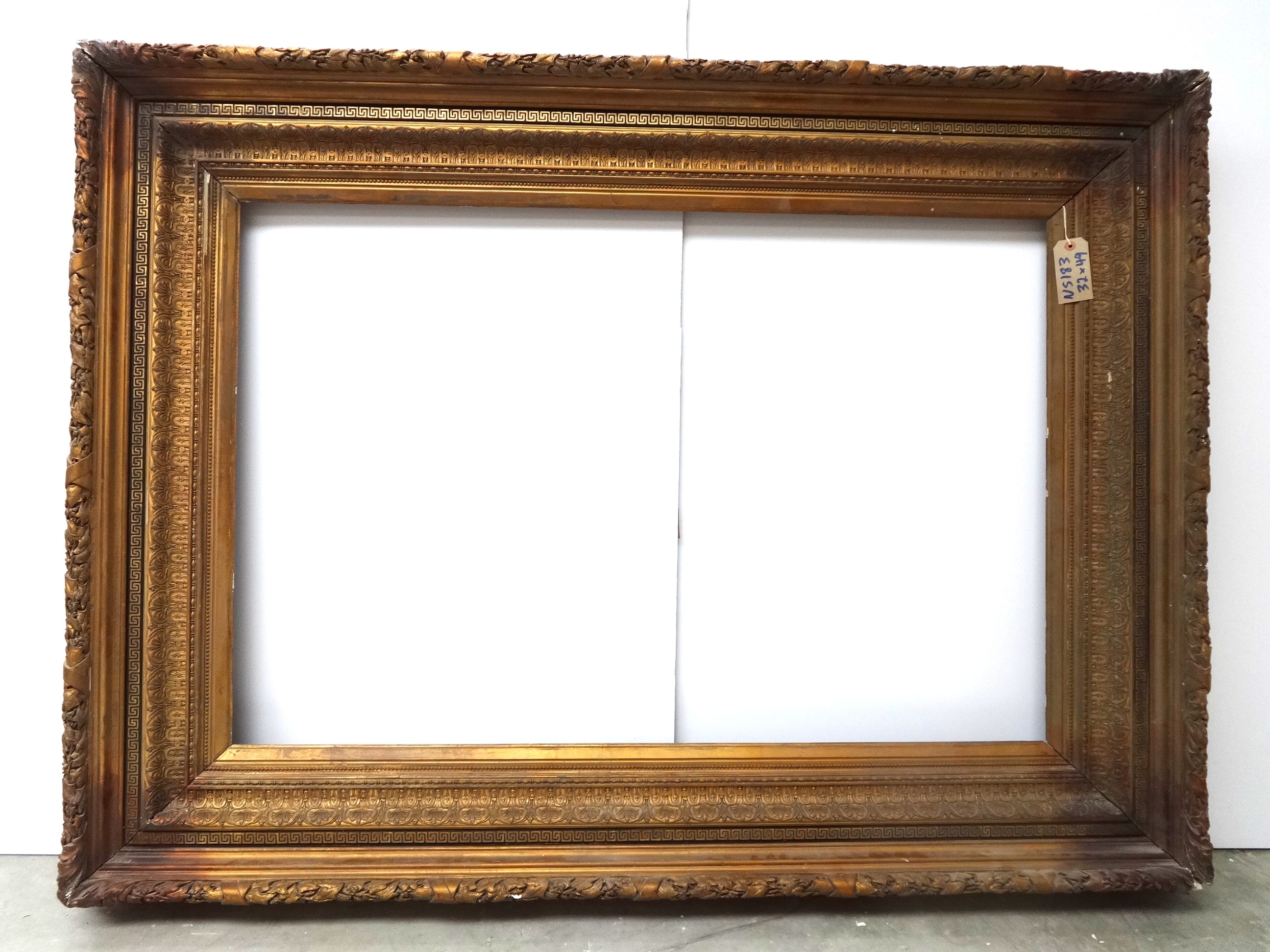 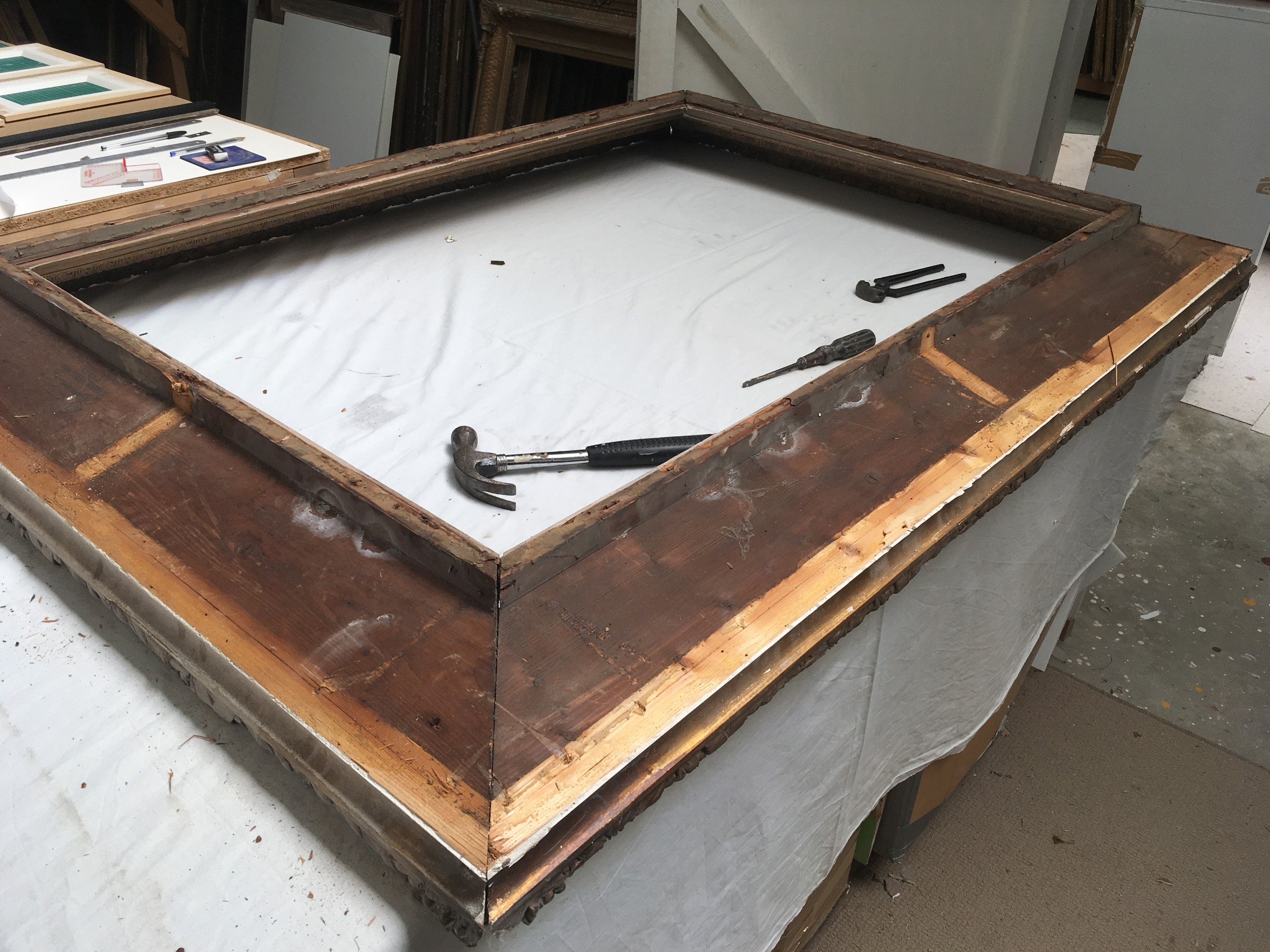 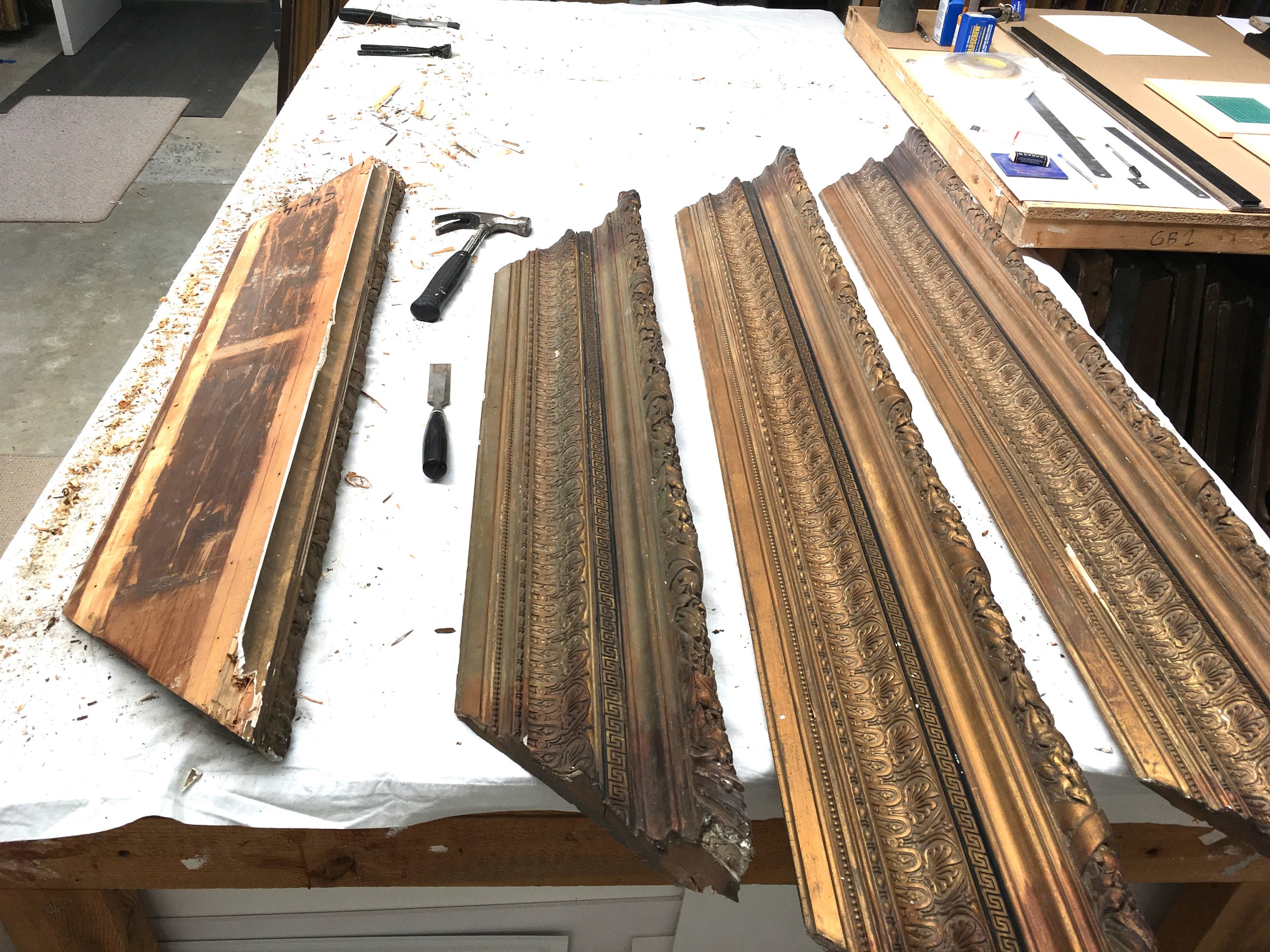 A challenge and no mistake.

I've had people come in with frames of a similar ilk (not as big) expecting me to chop and rejoin them while they wait.

Lovely job. How is it going to be rejoined?
https://www.instagram.com/dermotmcardle/
Top

"With great skill and dexterity"

BTW, it was originally a vertical frame. One of the short sides is dirtier than the other 3 sides.
Jerome Feig CPF®
http://www.minoxy.com
Top

We used to do a lot of these, predominantly for one customer who trawled auctions for antique frames and the gave me them to chop down and frame is smaller oils - also purchased at auction. Some of the paintings were very old and some quite valuable. I always iked resizing the frames, but was a bit nerve racking. You need some smart equipment too
http://www.decormount.com
Top

Over the years I have done plenty of these myself. I don't do as many as I once did, there used to be an auction house in our town which supplied many of these frames and I guess some probably came from charity shops and car boots, well the availability of these frames is not as easy as it once was and lots of nice frames have been given the shabby chic treatment and all to often ruined. Fashions have changed over the years and many people are no longer into nice things with a bit of antiquity.

I still get some to resize and some to repair damage, I don't really promote myself as doing this, but people just come in and ask me if I can do this, or that. I am fortunate to have an original Stanley frames vice, mounted onto a reinforced piece of board as shown in Pete Bingham's book. I did at one time have a couple of large biscuit tins of old bit of compo ornamentation removed from old frames, which I inherited from a retired framer. It his day old and damaged frames were not hard to come by and they were often a ready source of old compo ornamentation. Just about all on this has now gone!

I still like to work on old frames as I like saving old things. If you are thinking about trimming these old frames down to size with a Morso, this is likely to be a bad idea. In the earlier days of my business, I used a Nobex proman 110 hand operated Mitre saw, my future plans are to use an electric sliding mitre saw with adjustable stop blocks mounted onto the wooden base board. The saw I have bought has soft indents for the 45 degree angle settings so it is easy to slightly reposition the cutting angle. The sliding mitre saw has a reasonable size of extension at the front which can be clamped in place against the stop blocks.

The stop blocks are adjusted in and out by means of ordinary wood screws and an engineering vernier protractor which has markings for every three minutes of arc, aiming between these markings it is easy to resolve half this amount, so I reckon setting the angle to an accurate 45 degrees is not much of a problem. The blade also needs to be vertical to the bed of the saw and again accuracy is necessary, it is not so easy to get this right with the vernier protractor, but I also have a Bevel box digital angle gauge with can resolve teeths of a degree. These days It is possible to easy set things up like this to digital accuracy at low cost and if this is something which others are considering doing many things are more easy to set up than before.

Nailing and gluing mitres is still a manual process and takes time, skill and patience. You also need to practice on your own Items until you are good enough to take on customers work yourself. As has been said before many times by different members on this forum "Don't practice on customers property", is just not that easy. Things can go wrong and you need to be able to cope with these when they happen to a professional standard. This is not going to be for everyone, but if you are the only framer in your immediate area who can successfully undertake such work, it may be a helpful string to add to your bow, but you will need to be prepared to do the work to a really high standard, as customer expectations will be high.
Mark Lacey

Most of the frames I repair, or resize are not of great value, some are part of the customers family history, but not always. Much of the stuff that I do which is a little bit different was never planned at all. It just happened along the way.

I guess the start of it all was back in 1999, I was working for a radio and microwave communications company, which got most of it's work from the then telecoms giant Nortel. Well, Nortel went bust and after a while I was surplus to requirements and was made redundant. I had earlier owned and ran a secondhand books and antique prints business. It all sounds rather grand, but it was not much of a business and my wife and I struggled to get by, but I did remember customers bringing in prints and vintage advert which had been framed and I realised that there was more money in framing the item than I got for selling.

I signed on at the job centre and eventually was offered retraining and chose to be retrained as a picture framer. I spent six months framing at Triton Galleries and then still could not find a job. Eventually it came down to having to start my own business from home, that was not a great success either and I mostly bought and sold things through the auctions, did bookbinding repairs for the secondhand book trade and hand tinted old engravings. In case anyone thinks that this sounded good, it was not. We struggled to keep the bills paid and I am really impressed when I hear of members making a good job of running a framing business from home.

After a while, a framing shop in Totnes closed down and were selling off their equipment, I did not have much money and lots of other people who appeared to have the money were interested in buying the equipment and materials. Every time I managed to earn some spare money, I would phone up to see if there was anything left that would be useful for me starting my own business. As far as I recollect almost nothing had been bought by anyone else. It took me ages to buy most of the contents of the shop, but this is how I started the Dartmoor gallery.

I had not been open very long when a lady framer asked me if I wanted to buy a large quantity of mouldings. I did know anything about what mouldings were worth buying, or how much to charge for them and did not realise that a large quantity of very large American catalogue Larson Juhl ornate mouldings were quite expensive. Customers went for these in spade fulls and after a while I was running out. I could not find anything like these, so I started stacking smaller mouldings together and hand finishing them. A customer told me that I was "not your average framer" and this is how I got my forum name.

None of this was planned, people asked me to do various things for then and we were struggling to pay the bills so I agreed to undertake all manner of odd jobs. I had already worked at one time in the early 1990's repairing small bits antique furniture for a living and as a bookbinder and paper restorer, so I already had some expertise in doing stuff like this and things have just gone on from these unplanned beginnings, When we took the shop on, it really was make, or break and it was a miracle we survived. Seven months after starting the shop, I had a heart attack and when I came out of hospital was not well for a long time.

If I was not doing things that nobody else wanted to do, I don't think I would be here now. Does it pay to be different and offer your customers things that are different? I would say it does.
Mark Lacey

vintage frames wrote:Lovely job. How is it going to be rejoined?

I glued/screwed on a backing frame, triangular shape to support the frame profile, so I could cut the frame to size, I will just glue, screw, and nail the corners, use the Ulmia spring clamps, and some backing corner blocks.... whatever it takes basically!

That's very good advice NYAF, I would probably not recommend cutting any antique frame on a morso, unless you have a set of blades you don't mind chipping, so many antique frames have rogue nails either in the rebate from holding in the glass etc, or on large profiles holding ornament or .. is just not worth risking damaging a good set of blades.

I use a circular saw or a mitre block and handsaw.
Top

That's what I call - real picture framing.
No twitsy faffing about with the underpinner; just sleeves rolled up, hammer and nails and push the thing together.
Well done Richard.
https://www.instagram.com/dermotmcardle/
Top

Some time ago I bought a gizmo called The Little Wizard Metal Detector.

It wasn't very dear and it picks up any metal embedded in wood. The worse ones are snapped-off rusty nails. 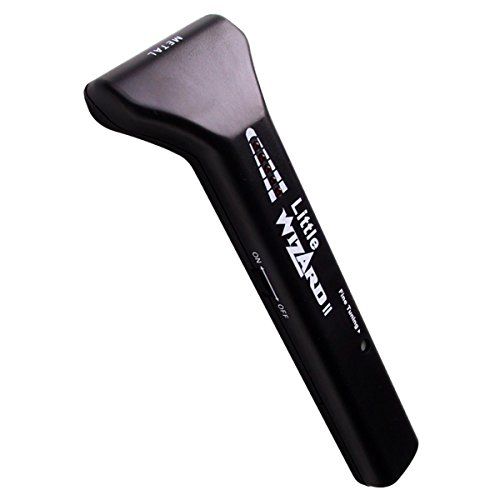 Beautiful old frame, Richard. So much character at the back, too. Good luck

What a cracking thread.

Loved reading about how you got started, Mark.